On November 27, 2020, Niclas Rieger, Iago Perez, Noémie Ehstand, and I, Meriem Krouma, participated as early-stage researchers (ESRs) of the CAFE project in the European Researchers’ Night. Through this blog, I want to talk about my experience and the collaboration with my colleagues in such an event. The idea was to talk about climate change, weather extremes, and their impact on daily life. The event was to be given in front of children and online: a real challenge!

The Researchers’ Night is a European public event. It is funded under the Marie actions Skłodowska-Curie (MSCA). It offers researchers the opportunity to show their work interactively and to highlight the contribution of science and its impact on daily life. The objective of this event is also to encourage and inspire young people to pursue a scientific career. The scientific presentations during this event took place simultaneously in around 450 cities in countries across Europe and beyond. The main idea is to bring researchers closer to the public. Researchers’ Night 2020 was the 16th edition and it was maintained online, because of the sanitary context of this special year. As a result, everyone could stay safe at home and it was up to the scientists to come to families and children’s homes through the small screens.

As ESRs, we wanted to take part in this show to present our work and our project which is about weather extreme events. The team was composed of 4 PhD students: Noémie, at Instituto de Física Interdisciplinar y Sistemas Complejos (IFISC) in Spain, is working on Coherent structures in sub-seasonal-scale circulation; Niclas, based at Centre de Recerca Matemàtica (CRM) in Spain, works in Sub-seasonal forecasting of extreme precipitation events. Iago is based on Universidad de la República, Montevideo, Uruguay, and his PhD work concerns Rossby wave packets and their role in atmospheric predictability; and finally, I, Meriem, am working on ensemble weather predictability at ARIA Technologies and Laboratoire des sciences du climat et de l’environnement (LSCE) in Paris, France. We are all doing our PhDs within the CAFE Project. In addition, we were supported by the great help of Daniel Ramos, CRM communication expert.

Preparations began a month before the event. The first step was to write the script as recommended by Daniel Ramos, after our first meeting. With great motivation and creativity, we started writing, discussing ideas and different organization points such as how far we wanted to go in this one-hour presentation, which languages to use because we are a multilingual group, what kind of platform and presentation we wanted to do … Then, we opted for the storytelling style: we decided to disseminate our ideas about extremes, climate change, and our PhDs with a scenario that included short stories: each story would tell about a character living somewhere in this big world and confronting problems due to climate change, each character shared his experience and our research projects were a sort of solution to each one. Our idea was to alternate between the participatory and informative approach, we wanted it to be clear, interactive, and joyful at the same time because we believed in the superintelligence of children and that our role is more to facilitate the transmission of the idea to them. The extreme events we chose were marine heatwaves, fires, floods, and droughts respectively associated with a different (fictional) character. As I mentioned earlier, our PhDs were represented as a way to help them. Iago decided to help the character with fire problems, Noémie wanted to help two characters suffering from marine heatwaves and drought, Niclas and I chose the flooding problem. The idea that we wanted to share with kids is that sometimes we could have several solutions for the same problem, as it is possible to have a solution for two quite different problems and also to emphasize that sometimes we won’t be able to find exact solutions for each problem. 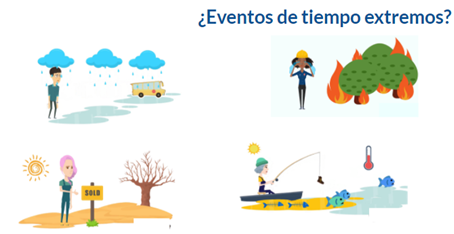 A week before the event, we were informed that our participation was not only going to be broadcasted in Europe but also in Uruguay as the university “Universidad of Uruguay” is one of the partner institutions of our project. The idea was to introduce the first edition of Researchers’ Night in Uruguay. We were initially worried a little bit as Niclas, Noémie, and I are beginners in Spanish. But after some discussions, we all decided to participate. In addition, we decided to carry out the event in Spanish so that the event would be clear and understandable for children of any age. And as Iago said: “After all, what is the meaning of research if the knowledge is not shared? Therefore, when they asked me to participate in the Researcher´s Night, I didn’t hesitate. Plus, talking to a younger generation about what extreme climatic events are, their importance, and why they will become more frequent in the near future, is key to explain the importance and danger of this matter”.

November 27, at 6 pm in Europe at 2 pm in Uruguay, after many repetitions and Spanish corrections from Daniel and Iago, that was somewhat a challenge for me, as I was the only one that never has lived in a Spanish-speaking country, so, we started our online live event. We were waiting for children and guess what? We got an audience with an average age of 30 years old, which was unexpected and funny. Despite the stress and some technical problems, we had a great audience, and we did a good performance and I think all of us were satisfied as we had good interaction and questions with our public, as described by Noémie “Pursuing a PhD is not always easy and can become at times frustrating but communicating one’s work and generating interest and positive feedback from a broader audience is always extremely rewarding and motivating. So, I was very happy to participate in this event, even more with such a nice team. Plus it was the first time that I gave a talk in Spanish, which was really fun!”

And finally, with some of my own thoughts…

It was probably my first experience. I wanted to take part in it because I would like to be involved in mediation actions. I would have preferred it to be in person, just for the pleasure of sharing and explaining to children about the climate and the importance of adopting an eco-responsible attitude since their young age and being aware of what is going on. I would have liked to be able to see their interaction and how far their imagination and understanding can go. I was very much in favor of doing this for the children of Uruguay as well, even though I made more effort to speak in Spanish, but because I still believe that climate change and its impacts, are and will be affecting every corner of this world and that it is good that the dissemination is made equally to all. I was very happy to have shared this experience with people who are as responsible and concerned about the good of others as they are about the world. I learned a lot from the exchanges we had, especially on a human level, that makes me really proud to belong to such a community. I was also happy to receive congratulations about my “very good Spanish” especially from native speakers. In the end, I am thankful for the encouragement of everyone.