Importance of the Rossby Wave Packets in the Atmosphere

We all have experienced (or will experience) the intensity of an extreme meteorological weather event in our lives, for example, persistent high temperatures during a heatwave or intense rainfall due to the development of an extratropical cyclone. Even if these events do not appear very often, they cause severe human and economic losses in the areas they cross. For example, the European heatwave of 2003 caused around 30.000 deaths in Europe and a water shortage that severely affected food production and even caused the shutdown of nuclear power facilities in France. In addition, several studies have shown that these extreme weather events will appear more often and with higher intensities due to the climate change induced by human activity.

What are Rossby Wave Packets?

What exactly are Rossby Wave packets? They are meanders, deviations of the strong westerly winds that travel at the high atmosphere of mid-latitudes from west to east that travel by what is called “downstream development mechanisms”. Normally, the strong westerly winds travel around the Earth forming a belt-like pattern but when a Rossby Wave Packet appears, the wind flow shows strong oscillations that resemble a snake movement (Figure 1). These “atmospheric snakes” are the Rossby Wave packets traveling in the atmosphere, and during their lifetime they transport huge quantities of energy modifying the weather in the areas they cross. Intense and narrow currents of westerly winds act as a highway for the RWPs and are where they gain enough stability to last longer periods in the atmosphere, under certain circumstances, from several days to 2-3 weeks before disappearing. These packets, due to all the energy they carry, are considered precursors of extreme weather events, and also increase the complexity and uncertainty of the meteorological forecast in the areas they cross. These phenomena appear in both the northern and southern hemispheres.

Figure 1: representation of the usual flow of the jet stream in the Northern Hemisphere (left) and during the propagation of a Rossby Wave Packets(right) , greenish and reddish areas indicate the main wind flow course. (https://https://oceanservice.noaa.gov/facts/rossby-wave.html)

If we can understand which processes favor the development of these long-lived packets, we would be close to knowing what phenomena can shape weather and climate in the mid-latitudes and enhance the detection of extreme weather events between 10-30 days. Thus, my research focuses on the study of the climatological conditions which favor the apparition of Rossby Wave Packets that last more than 8 days in the atmosphere, (which are wave packets with great stability and energy), and to identify under which circumstances the meteorological forecast can correctly predict the apparition of these long-lived packets in the Southern hemisphere.

State of the art of the study of Rossby Wave Packets and the importance of climate modes in the Southern Hemisphere climate.

Until not long ago, the study focused mainly on the Northern Hemisphere whereas on the Southern Hemisphere there were fewer studies, and they did not focus on the influence of climatological events in the frequency of occurrence of these packets. It is important to fill this gap of information in the Southern Hemisphere to have a more complete understanding of how the Earth climate system works to increase the reliability of the meteorological forecast systems.

In one of our research studies, we observed how long-oscillating trends of the weather affect the formation and propagation of long-lived Rossby Wave Packets during Southern Hemisphere summer (December to March). The climatic trends studied in that research are:

1.-El Niño Southern Oscillation, (ENOS): it is one of the most important and studied climate modes. It consists of a changing pattern of sea surface temperature in the tropical Pacific that triggers the development of processes that modify the weather on a global scale. When the tropical Pacific sea surface temperature is warmer (cooler) than the average, is signaling the manifestation of El Niño (La Niña) event (Figure 2). 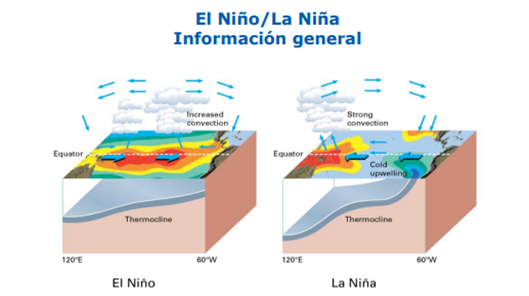 Figure 2: Wind circulation flow and oceanic circulation anomalies caused in the tropical Pacific during El Niño events (left) and La Niña (right). During El Niño years, we have sea surface temperature above average in the Tropical Pacific due to the inversion of the usual wind circulation, introducing hot surface water in the eastern Pacific basin. On the other hand, during La Niña events, the usual wind flow is strengthened, bringing to the surface cold sub-superficial water that cools the sea surface temperature.

2.-Southern Annular Mode, (SAM): it consists of the displacement of strong westerly winds between high and mid-latitudes in the Southern Hemisphere due to the changes in superficial pressure located in the center of the Antarctic. It has two stages, SAM – and SAM +. In SAM + stages, the pressure at the Antarctic is below the usual, causing the apparition of a low-pressure cell that causes the displacement of strong westerly winds towards high latitudes. As a result, the cold and humid winds are contained far away from the Southern American continent and enable the development of sunny weather and high temperatures. On the other hand, during SAM – we have the opposite effect, this is, the pressure in the center of the Antarctic is above the usual, so the strong westerly winds now move towards subtropical latitudes, bringing rainfall and cold and humid winds to South America (Figure 3).

Figure 3: Stages of Southern Annular Mode or SAM. Red arrows go from the highest areas of pressure to the lowest,
purple shows the resultant main wind circulation and blue lines show the development of a cold front.
Source: http://met-ba.blogspot.com/2015/09/30-9-2015-oscilacion-antartica-o-modo.htm

We observed how ENSO and SAM, affect the propagation of long-lived RWPs during the austral summer (December- March) of the Southern Hemisphere from 1979 to 2020. The results obtained in this study suggest that during years of negative SAM, we will observe more extreme weather events caused by the apparition of these long-lived packets. Thus, extreme weather event detection in the meteorological forecast between 10-30 days in advance should be more precise during negative SAM years, and less accurate during years with La Niña/positive SAM events because these wave packets should be more easily represented during years in which the atmospheric conditions favor their apparition.

During years with SAM – events, there are more long-lived Rossby Wave Packets compared to its opposite stage, (SAM +), and these packets last significantly longer in the atmosphere. Because these wave packets need a strong and narrow westerly wind to propagate, we concluded that these differences are due to the two motives:

1st During negative SAM years, the strong westerly winds are generally more intense and show a narrower distribution in the mid-latitudes compared to the wind regime during SAM + years, acting as a better highway where RWPs can last longer in the atmosphere.

2nd An anticyclone cell is developed in the Southeast of Australia during years of SAM +, blocking the jet and the propagation of Rossby Wave packets, whereas in years of SAM – this blockage is either absent or more confined in more tropical latitudes (Figure 4).

Therefore, the atmospheric conditions established in years with SAM – support the development of more stable RWPs that last longer in the atmosphere compared to its opposite stage. 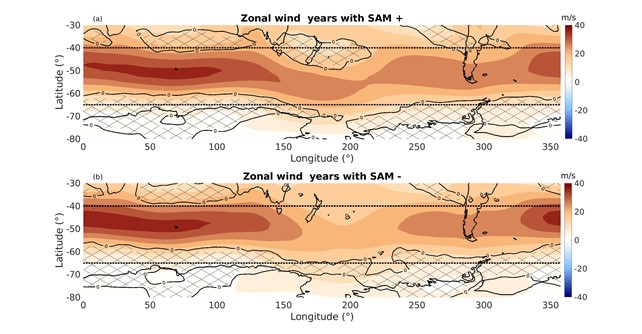 Figure 4: Mean wind flow during years with SAM + (up) and SAM – (down) events. Colored areas show the intensity of the wind speed in the eastward direction. Gridded areas highlight locations where the wind flow impedes or damps the propagation of Rossby Wave Packets.

In the case of ENSO, we found that during El Niño events we detected more long-lived RWPs compared to La Niña. Nonetheless, this tendency is as not as robust as in the previous pattern, and the changes in the wind flow are not as obvious as those during different SAM stages. Therefore, we assumed that this relationship is found because El Niño contributes to the development of atmospheric conditions that favor the manifestation of SAM –, and La Niña does the same with SAM +. Nonetheless, it is important to highlight that the presence of El Niño or La Niña event is not the only factor that determines the main stage of SAM. This may explain why this connection is not as strong as the previous pattern.

Impact of the 2003 heatwave: https://www.britannica.com/event/European-heat-wave-of-2003